Below is the text version of NORM’s tri-fold brochure Respect Your Son’s Body. You may download the PDF version of this brochure to print it in it’s original format. You may make and distribute as many copies as you with as long as the original document is not altered in any way.

Informed consent is meaningless when the patient himself is given no right to refuse the surgery.

“My own preference, if I had the good fortune to have another son, would be to leave his little penis alone.”

The forced amputation of a healthy part of an infant’s or child’s genitals in the name of medicine, religion, or social custom violates his human rights.

Every day in this country, more than 3000 infant males are strapped to a circumcision board, against their will to have their penis irreversibly altered for life. Amputation of a newborn’s health foreskin is the only contraindicated surgery for which the patient does not consent. It is an unethical practice. Parents often consent with incomplete knowledge of anatomy or surgical consequences. Tragically, many infants (who we know feel pain acutely) receive no anesthesia. The baby’s arms and legs are restrained. A probe is inserted between the glans and the foreskin and the two structures are torn apart. The foreskin is crushed and a cut is made in it. It is then pulled forward and amputated. The raw glans is then totally exposed, which, along with the remaining inner foreskin, eventually becomes dried membrane and leaves the shaft skin taut and immobile. This “Little snip” removed from 50 to 80% of the sheath’s structure. A permanent, visible scar remains. This violation of body and human rights robs the male of his birthright: an intact, fully functional penis.

The following conditions are iatrogenic (doctor-produced) and are not found in the normal penis protected by the foreskin:

Hemorrhage. This occurs with many infants’ circumcision.

Meatal Ulceration. It is caused by the raw glans being constantly abraded against diapers. This occurs in 30% or more of circumcised infants.

Meatitis. Inflammation of the urinary opening, may lead to meatal stenosis (narrowing of the opening).

Excessive Skin Loss. This results in tight and painful erections.

Penile Bowing/Curvature. Uneven removal of skin can cause this.

Hypospadias. A urethral opening cut on the underside of the penile shaft that can be caused by a surgical mishap during a circumcision.

Epispadias. A urethral opening cut on the top of the glans that can be caused by a surgical mishap during a circumcision.

Skin Tags. Random pieces of remaining foreskin adhering to the nearby skin.

Skin Bridges. Tissue adheres to the glans and forms a bridge/tunnel from the shaft to the glans.

Discoloration. Shaft skin appears darker than the exposed remains of the inner foreskin from the scar to the glans.

Circumcision “Ring.” This is a dark ring or discolored skin at the scar site.

Cut now before he has problems. 85% of the world’s males are intact. They have no more penile problems than circumcised males.

It’s more painful if done later. Even with anesthesia, at any age it is a painful procedure with the potential for serious complications.

Smegma is bad. This natural secretion assists in lubricating the glans. Females also produce genital smegma. Smegma of either sex is not carcinogenic.

It’s cleaner without a foreskin. Children can learn genital hygiene just as they learn to brush their teeth and clean behind their ears.

Phimosis. This rare condition occurs when the foreskin cannot be retracted. Some males don’t have a fully retractable foreskin until puberty. “Congenital Phimosis’ is normal in infancy, childhood, and in some cases into the teens. If phimosis continues into adulthood, it can be alleviated by gentle stretching of the opening.

Infections. Even circumcised males (and females) will get urinary tract infections (UTI). Antibiotics are a less traumatic solution than circumcision. Doctors and parents who forcibly retract the foreskin to clean or inspect can cause UTIs in intact boys.

Premature Ejaculation. A foreskin doesn’t cause premature ejaculations. The problem is a common sexual complaint among circumcised and intact men.

Penile Cancer. This is very rare (one in 100,000) usually in older men, both circumcised and intact. This is related to HPV, a sexually transmitted virus.

Cervical Cancer. We now know that cervical cancer is associated with a history of STD. Foreskins do not cause cancer. Women with circumcised partners and lesbians can get cancer.

AIDS/Venereal Diseases. Some fear small tears in the foreskin might allow HIV or other infection to occur. However, small tears in the taut shaft skin of a circumcised male can also occur. America, where most males are circumcised, has the 5th highest rate of AIDS in the world and a high rate of sexually transmitted diseases (STD). 80+% of American sexually active adult males are circumcised. It has not reduced the risk of AIDS or STDs!

Peer Pressure. Parents fear an intact son will be ridiculed by friends. With circumcision declining, it will be the circumcised boy who may feel different. Males eventually realize that “all men are not created equal” without suffering emotional harm. Like Father-like Son. One’s psyche is not so fragile that he must have a clone of his father’s or sibling’s genitals for mental well-being.

Circumcision Wish. A very small minority of intact men wish that their parents had had them circumcised in infancy. Such men can freely choose circumcision. The problems of a few do not justify circumcising the majority.

Men Prefer Being Circumcised. With no accurate means of comparison, the typical circumcised man has no idea with he is missing. A man, colorblind from birth and thinking his sight is normal, might also never question his condition. An increasing number of men express resentment about being circumcised and are seeking restoration information.

Every Nation Circumcises. Wrong! More than 85% of the world’s males are intact. The U. S. is the only country routinely circumcising the majority of its newborn males for nonreligious reasons.

Christianity Requires It. Wrong! Christ, who as Jewish, was circumcised by the covenant of Abraham and had glans coverage. Jews for only the last 2000 years have used the radical denudation of the glans. Circumcision is not required of Christ’s followers. St. Paul’s letter to the Galatians states, “In Christ, circumcision availeth nothing.”

Respect Your Son’s Body, His Feelings and His Human Rights!

THE ONLY CARE THE INTACT PENIS NEEDS IS TO WASH THE OUTSIDE.
DO NOT FORCIBLY RETRACT THE FORESKIN!
UNEDUCATED HEALTH-CARE PROFESSIONALS MAY ATTEMPT THIS!
SAY NO!

A Special Message to Parents

Parental Rights. Parents have the right to consent to surgery if the child faces a threat to life or health. THE FORESKIN POSES NO SUCH THREAT.

Parents do not have the right to request the amputation of any other healthy part of the body and the penis should be accorded the same respect. Many circumcised men may deny any negative feelings about their circumcision. However, a 1991 survey of 301 males seeking restoration information showed almost 70% of those circumcised as infants or as children resent their parents for their circumcision. 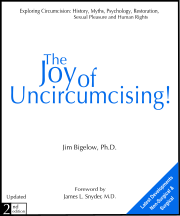 The Joy of Uncircumcising is available in both PDF eBook and Print format, buy your copy today!